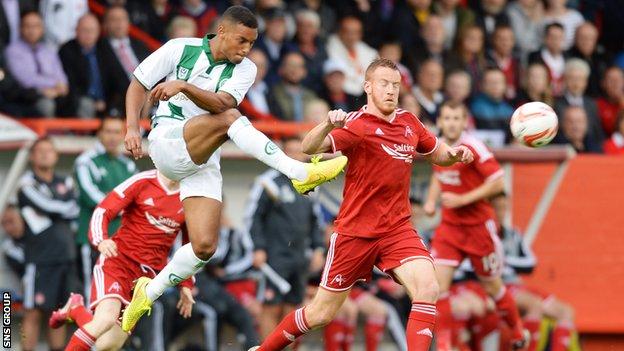 Aberdeen manager Derek McInnes insists his side can advance in the Europa League after they were held to a 0-0 draw at home by FC Groningen.

The Dons had the lion's share of possession in the first leg of the second round qualifying tie but could not break the deadlock.

"I think we're more than capable of going over there and winning," McInnes told BBC Radio Scotland.

"It's not the worst result - we hope to win and we hope for better."

Niall McGinn and Peter Pawlett created the best openings for the Dons in a game of few chances.

We've got goals in us - I'm sure of that

"For spells, it looked as though the breakthrough was going to come," McInnes added. "We really showed we can pass the ball; we moved the ball well, it was like a game of chess at times.

"At the minute, they might think it's a better result - we've all seen the importance of scoring away from home. We know if we can score over there then they've got to go and score two.

"I don't think we're in a position where we need to chase the game, I really don't."

Of the impressive Pawlett, McInnes was full of praise, and he also singled out full-back Jonny Hayes for his attacking intent.

"Jonny was taking people on and beating them," he said. "He feels he can do that from that from a deep position. You see the pace of what they bring on, the boy Antonia, who they've just signed, is rapid quick but Jonny matched him stride for stride on more than one occasion.

"There was lots to be pleased about with the team; I thought there was a maturity and I'm pleased with that. There was a confidence about us.

"We just lacked that cutting edge towards the end. We've got goals in us - I'm sure of that."

Looking ahead to the second leg in the Netherlands, McInnes is predicting another tight contest but is sure his charges can come out on top.

"One goal could decide the tie - we just have to make sure it's us who gets it," he said.