Germany captain Philipp Lahm has retired from international football after leading his side to victory at the World Cup in Brazil.

The 30-year-old Bayern Munich defender, who can also play in midfield, played 113 times for Germany.

Lahm will continue playing for his club side, where he renewed his contract until 2018 shortly before the World Cup. 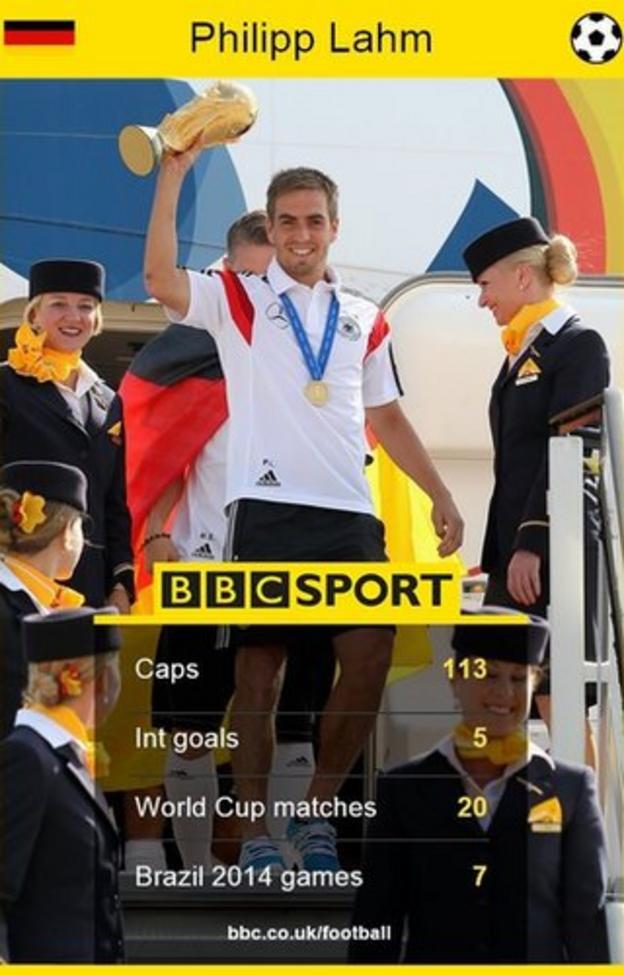 His retirement from the national side was confirmed by the German FA (DFB).

"I am happy and grateful that the end of my career with the national team coincides with winning the World Cup in Brazil," he said in an open letter on the DFB website.

Lahm's international career started in February 2004 with a 2-1 defeat of Croatia and ended with the 1-0 win over Argentina in the World Cup final on Sunday.

DFB president Wolfgang Niersbach said: "Philipp called me this morning and personally informed me of this step. I very quickly realised that it was pointless trying to persuade him to reconsider his decision.

"He was not just a superb player for 10 years in the national team, but also a complete role model. I thanked him for everything that he's done for the DFB."

Lahm now plans to focus on the club side that he joined aged 11 and has been captain of since 2011.

"There is hardly a better farewell than to be a world champion at the peak of your career," Bayern chairman Karl-Heinz Rummenigge said.

"But for the national team, it will not be easy to replace Lahm as a player, captain and a man."