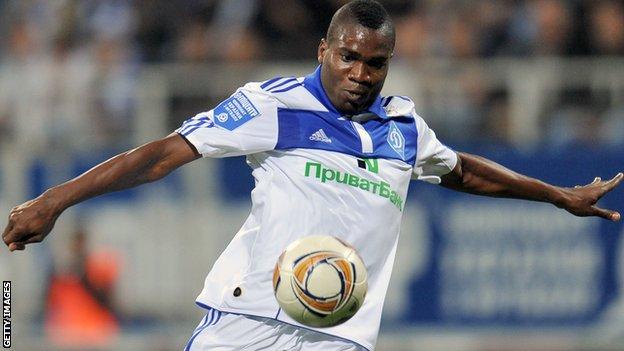 West Bromwich Albion have signed Nigeria striker Brown Ideye for an undisclosed fee, believed to be around £10m.

The Baggies announced the arrival of the 25-year-old Dynamo Kiev player on Friday, saying they had broken the club's record.

Ideye is the club's fifth summer signing as they bolster their squad.

"Brown is a quality striker and I'm looking forward to working with him," said head coach Alan Irvine.

"He's a strong, quick, powerful player who likes to get in behind defences and has plenty of Champions League and international experience."

He will meet his new team-mates, including fellow new boys Sebastien Pocognoli,Craig Gardner,Joleon Lescott and Chris Baird when they return from the club's pre-season training camp in Sacramento, California.

Irvine, regarded as a shock appointment when he took over in June, will be looking to improve on last season's 17th-placed finish.

Technical director Terry Burton added: "When I arrived at Albion the recruitment department flagged Brown up as the man at the top of their wish list.

"It is a fantastic signing because of the quality and the potential of the player. We're looking forward to seeing him play for the club and scoring goals."