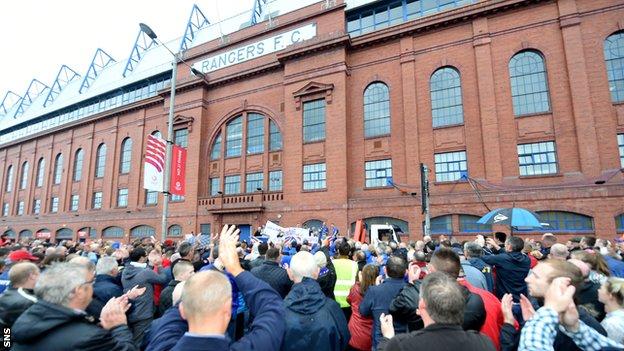 Around 1,000 Rangers fans staged a march to Ibrox to demand the stadium's future is protected by the board.

The demonstration was organised by the supporters group, Sons of Struth, which has held several protests against directors in recent months.

They are calling for the board to provide an undertaking that the ground will not be used as security against future borrowings.

The concern arises because of the club's financial situation.

The ball is back with the board, we've made our feelings clear

The board have admitted that additional money will need to be raised to meet the running costs for the next 12 months.

The club's intention is to hold a share offer to existing shareholders, but if those options are not taken up, and the board do not launch a share issue to non-shareholders, money will need to be raised by other means.

The only assets that can be borrowed against are the training ground, Murray Park, or Ibrox.

The directors have previously said that they have no intention of using Ibrox for security against any borrowings, but fans who protested at Ibrox want a more definitive assurance.

"One of our three main aims is protecting Ibrox, but we are also still part of the Union of Fans, who are looking for similar guarantees about Murray Park," said one of the SoS organisers, Craig Houston.

"The ball is back with the board, we've made our feelings clear. I'd be very surprised if no discussions were held behind the scenes as a result of this march.

"We'll give the board a few days to contact us, then we'll have a re-focus to see where we are."