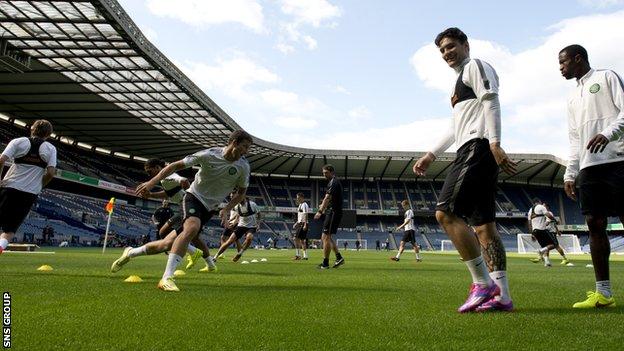 Manager Ronny Deila says the new pitch at Murrayfield is "perfect" as Celtic prepare to host KR Reykjavik in round two of Champions League qualifying.

Celtic play the second leg of the tie, which they lead 1-0, at the home of Scottish rugby as Celtic Park hosts the Commonwealth Games opening ceremony.

A mixture of grass and artificial fibres make up the Edinburgh surface, and Deila is impressed.

"It is a very good pitch," he said. "I don't think there will be any problem."

Celtic won the first leg in Iceland, with the winners progressing to play Irish side St Patrick's Athletic or Poland's Legia Warsaw.

Having overseen training at Murrayfield, Deila gave the Edinburgh stadium a ringing endorsement.

"It is fantastic," said the Norwegian. "The team will have the support and that is important and the pitch is perfect. So no excuses."

While the setting is unusual, the home side will have a familiar look, with goalkeeper Craig Gordon the only new arrival.

Deila is keen to bolster his squad further but concedes finding the right men is proving tough.

"We are working to try to get someone in," he explained. "It is a bad time, it costs more money. It is also about finding the right ones. I am after quality.

"It has to be someone who can come straight in and do something at once and that is very difficult. Or get a player who will be a good player in a while.

"Some clubs haven't started training yet again, so we have to find the right options."

KR Reykjavik counterpart Runar Kristinsson will put the emphasis on defence, even though his side trail.

"It's a very big task ahead of us, we had a difficult game against them back home," he said.

"Celtic had most of the ball so we'd expect the same. We defended well back home so we're going to see if we can do that again but mount some better counter-attacks this time and try to hurt them more than we did in Iceland.

"We're not rushing forward in the beginning, we need to start slowly and slow down the tempo a bit. We have to make sure we get good counters in."