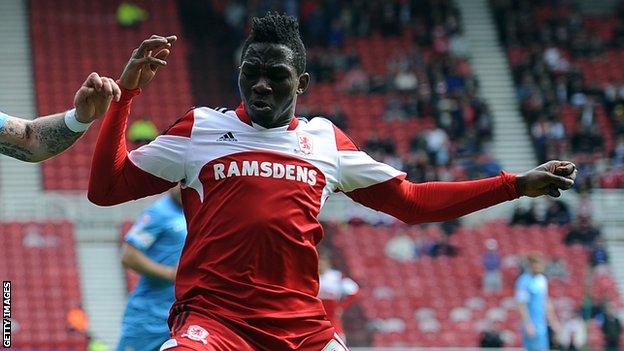 Nigeria international defender Kenneth Omeruo has agreed to return for a second loan spell at English Championship side Middlesbrough from Chelsea.

The 20-year-old centre-back spent the second half of last season at the Riverside and played 14 games.

BBC Sport has learned he turned down offers from outside England to rejoin the North East outfit.

Omeruo started every game for Nigeria at the World Cup in Brazil.

I like the atmosphere at Middlesbrough, the players and fans too are very supportive

"I am not in a hurry [to break into the Chelsea team] because everything in life is step by step," Omeruo told BBC Sport.

"I decided to return to Boro because I really enjoyed my last loan there and working with the manager Aitor Karanka.

"I like the atmosphere at Middlesbrough, the players and fans too are very supportive.

"It's such an easy choice to make and a key factor in going there is the chance to play first-team football."

A member of the Nigerian side that reached the round of 16 at the World Cup in Brazil, Omeruo has largely been loaned out by Chelsea since he joined in January 2012.

After signing for the Blues from Standard Liege, Omeruo was immediately sent to ADO Den Haag where he played 36 games on loan at the Dutch top-flight side.

He is yet to make his Chelsea debut, but remains positive about his chances at the London club where he recently signed a new deal that keeps him at the club until 2018.

"I was rewarded with a new contract because the club [Chelsea] knows what I am capable of," he added.

"I just need to focus on my career, give my best all the time and let my football speak for me.

"At the right time, I'll get my chance. For now, I believe in the Middlesbrough project and want to help the club compete for promotion."

Omeruo was key for Nigeria's defence that won the Africa Cup of Nations in 2013 and also played in last summer's Confederations Cup in Brazil.