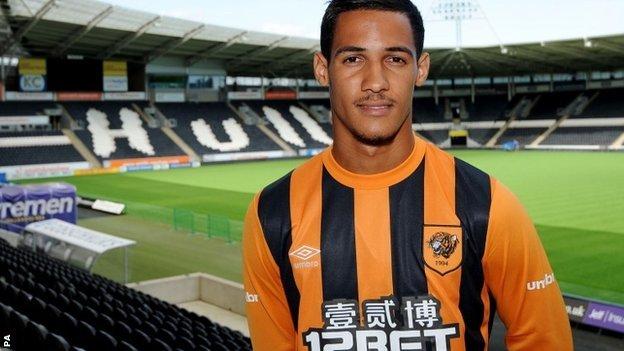 Tom Ince hopes his move to Hull City can boost his England chances.

The 22-year-old winger, who has arrived on a two-year contract following the end of his deal at Blackpool, has been capped 14 times at Under-21 level but is yet to receive a senior call-up.

"I've taken the long route (to the top flight) but feel I'm back where I belong," he told BBC Look North.

"This is the next step for me. I have ambitions and dreams to play for my country at the top level."

Ince, who had been a target for Inter Milan, spent the second half of last season playing in the Premier League on loan at Crystal Palace.

The former Liverpool youth-team player added: "It's been a whirlwind summer. The last six months have been a bit up and down but I've finally found my home."

Ince's father Paul was a team-mate of Tigers boss Steve Bruce at Manchester United in the 1990s. The wide player admits Bruce, whose own son Alex is also a Hull player, was a key factor in his decision.

He added: "The key factor was the manager. I have known Steve on a personal level and as a manager. I know what style of football he brings.

"I have good memories of Alex and I playing football in the lounge at Old Trafford. I'm sure it's surreal for the manager to see me back playing football with his son. There's that whole family feeling again."