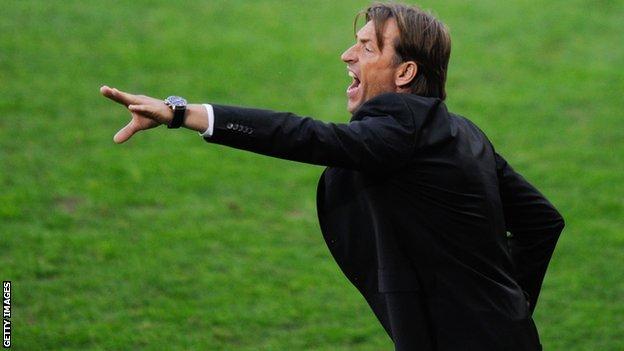 Africa Cup of Nations winner Herve Renard remains on Ivory Coast's shortlist to become their new national team coach after they cut the group of five names down to three.

Renard, who coached Zambia to the title in 2012, is joined on the trimmed-down list by fellow Frenchman Frederic Antonetti and Portuguese Manuel Jose.

It means Frenchmen Luis Fernandez and Francis Gillot - who were on the original shortlist of five - are now out of the running.

The shortlist was put together from a list of 37 prospective candidates.

A decision is expected by the end of July.

The new man will take over from Sabri Lamouchi, whose two-year contract was not renewed after the country failed to reach the second round at the World Cup in Brazil.

In September, the Ivorians begin the qualifiers for next year's Nations Cup in Morocco.

The 45-year-old Renard ended his second spell as Zambia coach in October 2013 to take over at French club Sochaux for the second half of the Ligue 1 season.

He was unable to prevent the struggling club from being relegated and has endured a tough start to the role.

Antonetti has had a long career as a coach in Ligue 1, most recently with Stade Rennes.

At the start of July Italian Giovanni Trapattoni told an Italian radio station that he was in talks over the job but a week later Ivory Coast invited coaches to declare their interest in the job, giving a deadline of 14 July for applications to be submitted.

The Federation say they now intend to interview all three men before making their decision by 31 July.