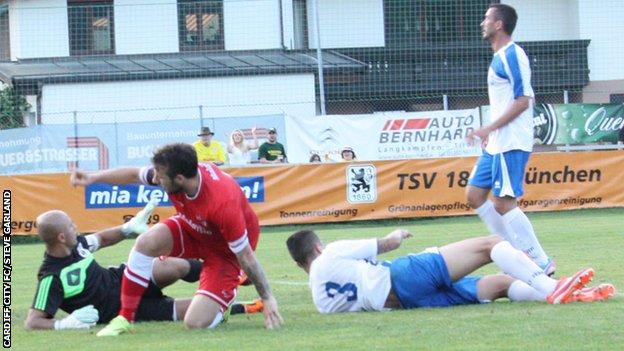 But the Russians provided significantly better opposition at the Kaiserwinkl Stadium in Kossen, Austria.

Islago Georgiev struck first, before a Fabio own goal and Aleksandr Kolmeytsev's header made it 3-0.

All the goals came before half-time as the Russians, looking particularly slick going forward, eased to victory.

Talented Bulgarian international striker Georgiev cooly chipped home a shot from outside the box on 29 minutes to make the breakthrough, after an even opening during which Nicky Maynard was denied by Amkar keeper Sergei Narubin.

Cardiff goalkeeper David Marshall was making his first appearance of the close season following a muscle strain but had little chance as Amkar hit their stride in attack.

Cardiff's Brazilian full-back Fabio headed an own goal to put the Russians 2-0 up after 35 minutes, as he was put under pressure at the far post from Georgiev's cross from the left.

Just before half-time Kolmeytsev looped a header into the top corner to give the Russians a comfortable lead.

Both sides made a clutch of substitutions after the interval and Adam Le Fondre fired over for Cardiff. But neither side threatened too much, though Solskjaer's team had possession.

Only three Cardiff players were on the field for 90 minutes - Marshall, centre-back Ben Turner and midfielder Jordan Mutch.

Cardiff's next pre-season game is away to Yeovil Town on Sunday.