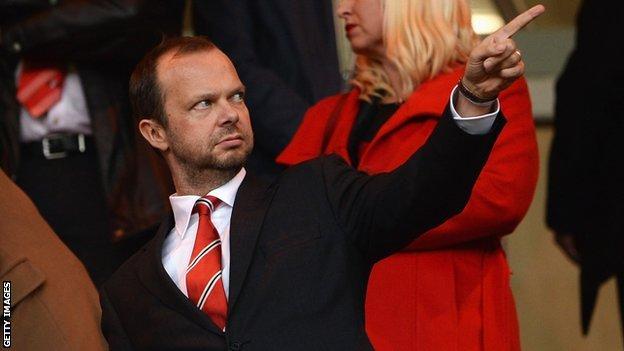 Executive vice-chairman Ed Woodward says servicing Manchester United's debt does not affect the running of the club because of their commercial success.

"It doesn't factor into the concerns I've got when I think about signing a player," Woodward told BBC Sport.

"And two seasons ago we were champions by 11 points."

The Red Devils won the 2012-13 title in Alex Ferguson's last season before retirement but his replacement, David Moyes then lasted less than a season as the club finished seventh last term, prompting United to turn to Louis van Gaal this summer.

Woodward added: "Sir Alex was never turned down in terms of money for a potential purchase of a player.

"The interest on the debt is £20m or something. That is less than 5% of our revenue."

Immediately after the Glazer family's leveraged takeover in 2005 the debt stood at £660m, with annual interest payments of over £60m, but by May 2014 the debt was down to £351m.

Woodward, who has returned to the UK after spending four days on United's tour of the United States, has already said the club would be willing to spend big, if needed, to prevent Spain's biggest clubs continuing to sign the top players.

Woodward has more immediate priorities though, as United look to recover ground on their domestic rivals after their awful year under Moyes.

A picture that emerged of Woodward apparently taking a selfie during a stunning 2-0 defeat in the Champions League by Olympiakos in February turned out to be him capturing the image of the scoreboard to provide an indelible reminder of a night he vowed would never be repeated.

The club have just announced a £750m, 10-year shirt manufacturing deal with Adidas, on top of the £370m they will receive from US car giant Chevrolet for a shirt sponsorship deal that will be launched against LA Galaxy in Pasadena on Wednesday.

Income will rise steeply from last year's total of £152.5m when the 2014 annual results are announced in September, but without on-field success that commercial growth cannot continue.

So further outlay can be anticipated in addition to the £56m spent on Ander Herrera and Luke Shaw.

"Of course it's in our capabilities," said Woodward, when asked if United could really afford to splash out £60m or £70m on a single player as Real Madrid and Barcelona have done.

"We are not afraid of spending significant amounts of money in the transfer market.

"Whether it's a record or not doesn't really resonate with us."