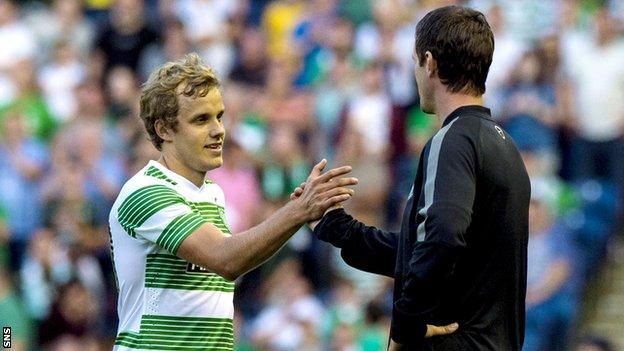 Manager Ronny Deila is asking for improvements after Celtic's 4-0 Champions League second qualifying win over KR Reykjavik round at Murrayfield.

Virgil Van Dijk and Teemu Pukki both hit doubles to seal a 5-0 aggregate victory and book a tie with either St Patrick's Athletic or Legia Warsaw.

Deila, though, wanted to win by more.

"In the second half we were a little bit sloppy," he said. "We should have kept up the tempo so we could win by more, but I have to be happy with 4-0."

Celtic were 3-0 ahead before half-time, with Van Dijk twice taking advantage of goalkeeping mistakes while the lively Pukki - given a rare starting place - finished off Callum McGregor's cut-back.

Pukki added a fourth with less than 20 minutes left, with the Icelandic side rarely testing the hosts at their temporary home in Edinburgh.

"I think the first half was good," Deila told BBC Scotland. "We started the game well and we've been talking about set-plays a lot in the past two weeks and we got a result through that, so that's something we are happy about. We created some good chances.

"The pitch was better. I wanted us to be even quicker. We have to work in training and in matches so we can get the tempo even better.

"We want to create things and entertain the fans. You need the ball and the tempo in matches. Today was a good start but this is not the best opponent we are going to get.

We need the right players so it's important not to lose our head and just go for something.

"The surface was excellent. Now that we have played here once we are looking forward to playing here again."

Craig Gordon is the new Celtic manager's only signing so far and the Norwegian says he is in no rush to add new faces.

"We are going to do it our way, like the club has always been doing," explained Deila.

"The club wants to invest in new players and we need that, but we need the right players so it's important not to lose our head and just go for something. It has to be good for us, but we are working hard to get it."