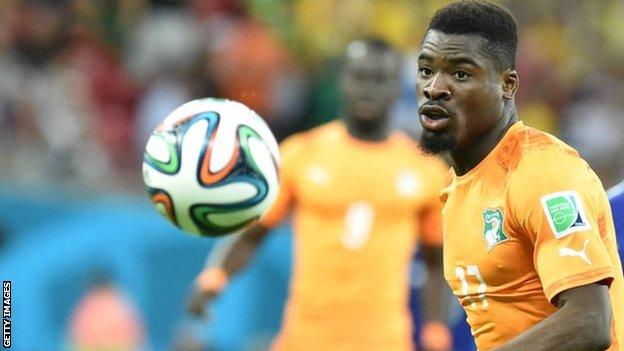 With sanctions looming over PSG after they failed Uefa's financial fair play (FFP) rules, the club has negotiated an option to buy Aurier at a later date.

The 21-year-old right-back played in all of his country's matches at the World Cup in Brazil.

"To play for PSG, with the exceptional players this club has, is a dream come true," Aurier told the club's website.

"I will give my maximum to help the club reach the summits. After taking part in the World Cup for the first time, I am having a fantastic summer.

"I would like to thank the club for the confidence they have shown in me."

Aurier had been linked with a move to the English Premier League, with Arsenal believed to have made a bid for the defender.

PSG president Nasser Al-Khelaifi said: "Serge Aurier, one of the most promising young players in world football, courted by the biggest clubs, has chosen Paris St-Germain to continue to shine on the European stage.

"We are delighted to welcome this young player into our team."

Aurier, who will wear the number 19, becomes the capital club's second recruit of the transfer window following the arrival of Brazil defender David Luiz from Chelsea.