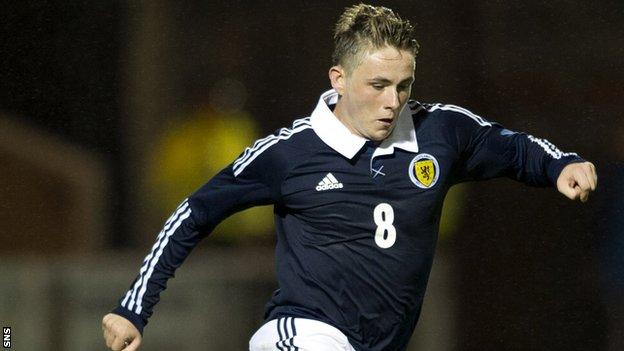 The 22-year-old returns north after he was released by English Premier League side West Bromwich Albion.

"We're delighted that we've been able to add Scott to our squad - he is a top-quality player with immense potential," said Hibs manager Alan Stubbs.

"He's an outstanding young player with a bright future."

The Scotland under-21 international left Tannadice two-and-a-half years ago but could not break into the West Brom side, and had spells on loan at Portsmouth, Milton Keynes Dons and Birmingham City.

"The fact he has agreed to come here to Hibernian is a tremendous coup for everybody at the club," Stubbs told the club website.

"Scott will add something different to what we already have within our squad - he is an attacking midfielder, who can both create and score goals.

"He's young, but has already gained a lot of experience from his time at Dundee United and also down south, so he will be equipped for the demands of the upcoming season.

"We'd like to thank our supporters for their patience shown over the past five weeks; hopefully they'll be hugely excited by Scott's arrival.

"We're pleased with the signings we've completed so far with hopefully some more to come in the near future."

Allan had been linked with a move to Hibs' Scottish Championship rivals Rangers, but explained why he instead chose to sign on at Easter Road.

The fact he has agreed to come here to Hibernian is a tremendous coup for everybody at the club.

He said: "I believe I learned a lot from my time down south - both personally and professionally - but I had my mind set on a move back home to Scotland.

"At this point in my career, I want to play football as regularly as possible and be closer to home and the move here to Hibs ticks all the boxes.

"I'm an ambitious player and I want to achieve success here with Hibs.

"I've been impressed with what the manager has said and I want to help the club get back into the Scottish Premiership.

"I'm really excited about what we can achieve - it will be a really competitive league, but it's a challenge that I'm looking forward to."