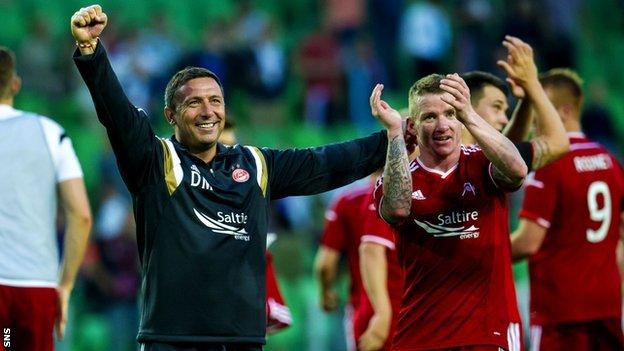 Derek McInnes warned Real Sociedad not to underestimate his side after Aberdeen defeated Groningen 2-1 in the Europa League.

An Adam Rooney penalty and a Niall McGinn strike gave the Dons a dream start, with Maikel Kieftenbeld's goal the only response from the hosts.

"We went about our business well," said McInnes.

"We would never treat any of our opponents lightly. If anyone treats us lightly they could come undone."

Aberdeen travelled to the Netherlands after a goalless draw at Pittodrie last week, with some Dutch players suggesting ahead of the second leg they had one foot in the next round.

However there was not a failure in the Dons side and they now face La Liga cracks Real Sociedad next week in Spain as their European adventure continues.

"[It was] thoroughly deserved," he said. "We showed a lot of different aspects to our game. We showed pace, invention on the break, good confidence in the final third at times.

"Then, when it was required, real resolve and determination and organisation to see the game out.

"Other than a 20 minute period when they had a bit of momentum I thought it was a very comfortable night's work. I'm not surprised, I felt we could get the result.

"If I'm nit-picking we could have scored another couple when they were gambling on us.

Other than a 20 minute period when they had a bit of momentum I thought it was a very comfortable night's work.

"There was people saying Aberdeen would come here and play with their heart and not their head, but I've got a huge regard for what I've got in the dressing room.

"I feel we've got a good team, there's lots to look forward to this season and beyond."

He added: "I think results like tonight can give us confidence to go to Spain and hopefully get a positive result to bring back to Aberdeen.

"Real Sociedad are going to be a real tough nut to crack, but I don't think they'll underestimate us. They'll look at tonight's result and see over the two legs we're a capable side.

"We showed a lot of dignity and a lot of respect for our opposition going into this game. One or two comments [from Groningen] wouldn't be getting said from my team."

Aberdeen midfielder Jonny Hayes admitted the players felt they had been disrespected by their opponents.

He said: "We had a tie a couple of weeks ago where we were 5-0 up after the first leg and we still wouldn't have come out and said the tie was over going into the second leg, so we were a little bit riled up.

"We were a little bit disappointed, we thought it was quite disrespectful of them to say that.

"We didn't need any extra motivation but I was quite happy ramming their words down their throats."