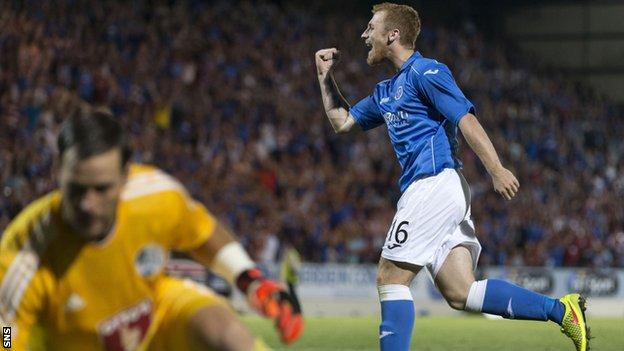 Tommy Wright praised the character of his men as St Johnstone defeated Swiss side Luzern 5-4 on penalties in the Europa League second qualifying round.

Stevie May's penalty had St Johnstone in front on the night before Marco Schneuwly levelled for the visitors.

Penalties was the only way to separate the sides, and Saints erased memories of the agonising shoot-out defeat in last year's competition to Minsk.

We practised penalties against Minsk, we didn't practise them before tonight, so that's the secret

"I'm just absolutely delighted to get through the tie.

"We knew it was going to be tough, they're a really good side. There's no doubt about it they've put us under a lot of pressure and had quite a few chances.

"I can't praise the players enough; spirit, determination, and ability not to be beaten. It just shone through in the whole performance.

"We always feel we can score and we probably should have had another penalty; David Wotherspoon's shirt was pulled inside the box before he got a shot off.

"When you look at Liam Caddis' chance it was probably the best chance of the whole game, but what character he showed to step up and take a penalty for a young man.

"When you go into extra-time, if they score we've got to score two. I think we'd have taken penalties and then hoped we didn't take them as badly as against Minsk last year [when the Belarussian side won 3-2 on penalties after a 1-1 aggregate draw].

"We practised them against Minsk, we didn't practise them before tonight, so that's the secret.

"People talk about you should have practised them but it's all about courage and who wants to step up, and holding your nerve and they held their nerve."

The Perth side now face Spartak Trnava of Slovakia in the next round for a place in the play-off round.