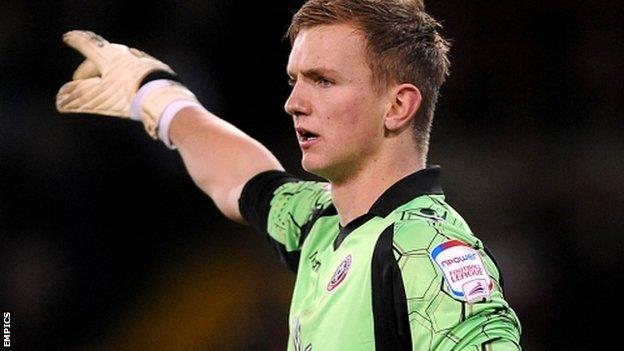 The 20-year-old has already made 73 appearances for the Blades.

It's a good club, looking to go places so for myself it was quite an easy decision when I heard they were interested

Long made his league debut in 2011 and was the youngest keeper to play for the club as well as being part of England's Under-20 squad for the 2013 World Cup.

"George is highly rated. He is tall, he communicates well and likes to command his box," said U's manager Michael Appleton.

"We need competition for every place in the side and with Ryan Clarke still on crutches we now have two good young keepers in George and Max Crocombe, who will push each other all the way."

Long said he was excited by the possibility of playing more first-team football while at Oxford as he looks to develop his career.

"I've spoken to the lads and they are all really positive," he told BBC Radio Oxford. "It's a club going in the right direction and hoping to challenge at the top end of the league.

"For myself as a young goalkeeper it's about playing Football League games. It will be a great experience to get some minutes under my belt and see where that takes me."

Long jumped at the chance to move to the U's on loan when he found out they were interested in his services.

"It's a good club, looking to go places so for myself it was quite an easy decision when I heard they were interested," he added.

"Every young player has aspirations to play at a higher level but at the minute Oxford is a great club for me to play some games and hopefully push them up the league. It's all about small steps."