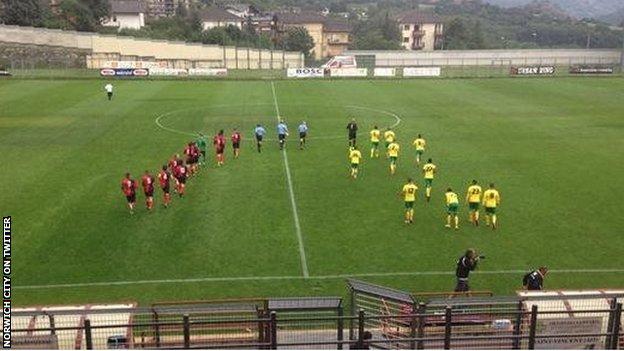 "You can only beat what's in front of you," Norwich boss Neil Adams said after a 13-0 pre-season win... The only problem was they did not know what was in front of them.

The Canaries have apologised to Italian side Saint-Christophe Vallee d'Aoste after a case of mistaken team identity saw them claim to have hammered the Serie D outfit.

Norwich - relegated to the Championship last season - were due to face Italian Serie C side Novara as part of a training camp in the country, but the fixture was cancelled.

Replacement opponents were drafted in and Norwich took to their website after the meeting to report a double-figure success over Saint-Christophe Vallee d'Aoste on Sunday.

However after the fourth tier club pointed out that they had not played any match against Norwich, it turned out that the Canaries had in fact faced a "regional select side" from Italy's Aosta region.

"In our original match report for this warm-up fixture, acting in good faith on the basis of information given to the club, we incorrectly reported that we had played against local club side SC Vallee d'Aoste," said Norwich in a statement.

"In fact the game was against an Aosta regional select side and we are happy to put the record straight and apologise to SC Vallee d'Aoste and their fans for the misunderstanding."

After the game, manager Adams - still thinking they had faced a club side - said: "With all due respect to the opposition, they didn't really give us the test that certainly we wanted at this stage of the season.

"I would have preferred a tougher work-out for the players because banging goals in is great, but we need to be tested a little bit more than we were tonight."

Norwich, who start their Championship season away at Wolves on 10 August, play French sides Bastia and Nice, as well as Spain's Celta Vigo in friendlies before the start of the league campaign.