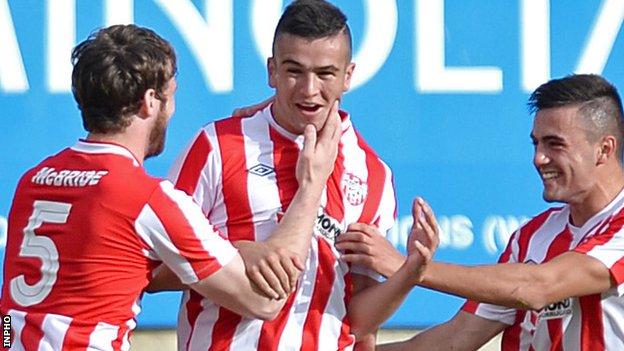 Duffy's calm finish put City ahead on 20 minutes before Rory Patterson fired into the bottom corner.

It was the perfect response from the Candystripes after Thursday's 5-1 defeat by Shakhtyor Soligorsk in the Europa League qualifier in Belarus.

Doherty denied Benson after the UCD midfielder was clear on goal before Duffy lifted the ball over keeper Conor O'Donnell to make the breakthrough.

The impressive Nathan Boyle saw his shot deflected wide and O'Donnell kept out a Patterson shot as the visitors pressed for a second goal.

It came three minutes before the break with Patterson slipping the ball across O'Donnell and into the UCD net.

Boyle set up Duffy to stroke home Derry's third on 50 minutes and he completed his hat-trick two minutes later with a side-foot finish from Joshua Tracey's cross.

The third goal in five minutes went to UCD although Doherty was to blame for letting Benson's free-kick slip through his fingers.

Molloy's curler came in the final minute and Patterson rounded O'Donnell before slotting home in the fifth minute of injury time.

The victory takes the Candystripes up two places to fifth and Derry also announced a new signing after the game.