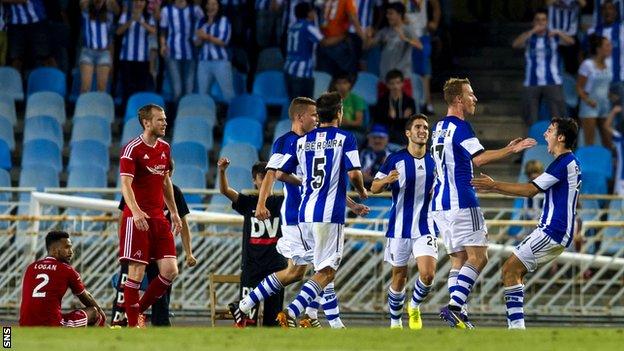 Aberdeen fell to their first defeat of the season against an impressive Real Sociedad side in the Europa League.

It was always going to be a tough shift for Derek McInnes's men and they did well to keep it at 0-0 for 45 minutes.

However, the Spaniards found their touch in the second half - although the Dons could have defended better when David Zurutuza broke the deadlock.

Sergio Canales' long distance shot beat Jamie Langfield to double the deficit, but they could not find a third.

That leaves Aberdeen still in the tie ahead of next week's second leg at Pittodrie, though they face a massive task now to overcome the La Liga side.

The Dons went into the tie on a high following their 2-1 aggregate win over Dutch side Groningen in the last round.

However, it soon became apparent that the Spanish giants were a big step up in class, and as the first half wore on they got more and more into their stride.

They could not turn their dominance into goals though with most of their shots going harmlessly wide.

The home side should have taken the lead in the 34th minute when former Celtic target Alfred Finnbogason latched on to a header from Chory Castro but he knocked the ball over the bar from close range, with Aberdeen's captain Russell Anderson just doing enough to put him off.

Ruben Pardo could have done better when just 12 yards out, but he put his shot over the bar.

The first goal was always coming but frustratingly for Aberdeen it arrived through basic errors, with Zurutuza prodding the ball past Langfield after the Dons defence failed to clear.

Markel Bergara robbed Barry Robson in midfield but hit the top of the bar, then Langfield had to hold a shot from Canales.

Canales was not to be denied though when he unleashed a 25-yard rocket past the Aberdeen goalkeeper.

The hosts looked for a third to kill off the tie and Inigo Martinez's header hit the underside of the crossbar after Langfield had denied Canales.

The Dons rode the storm and after the introduction of David Goodwillie and Nicky Low started to look a threat themselves, however the final ball let them down and they did not look like scoring what would have been a crucial away goal.