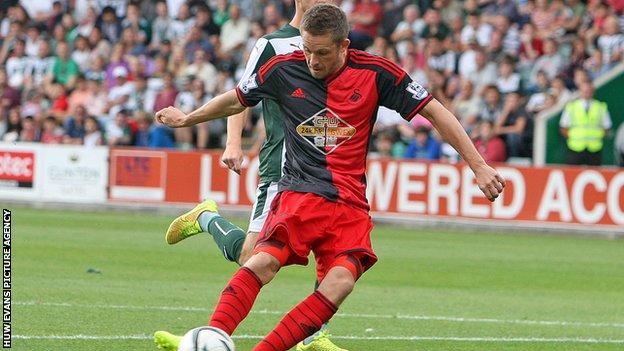 Swansea boss Garry Monk believes new signing Gylfi Sigurdsson has improved since he was on loan with the club.

Sigurdsson, 24, came off the bench on Sunday scoring twice in the Swans' 4-0 win at Plymouth.

"He's a top player. He's actually a better player than when he left us," said Monk.

"He adds to the quality of our squad and that's what you want.

"He's obviously going to try to work hard. We need to improve him in certain areas but I've already spoken to him about that.

"All-in-all he's come in and contributed straight away and that's what we want."

He thinks he has improved from his time at there and agrees with his former team-mate and new boss Monk that he has developed.

"Spurs are a big club. They are in Europe most years so I really enjoyed my time there," said Sigurdsson.

"I think I've gained a lot of experience by playing for them."

Sigurdsson is no stranger to Swansea having spent 2011-12 on loan at the Liberty Stadium from German club Hoffenheim.

He scored seven goals in 18 appearances for the club in their first season in the Premier League.

Sigurdsson hopes he can build on the experience he has gained from his time at White Hart Lane.

"It's just a new chapter for me now and hopefully I can push on for Swansea," said Sigurdsson.

"I'm very happy to be back. Last time I was here I really enjoyed it and I was very happy here.

"It doesn't really feel like I'm joining a club where I'm the new guy because I know all the staff and know half the boys so it feels like home."