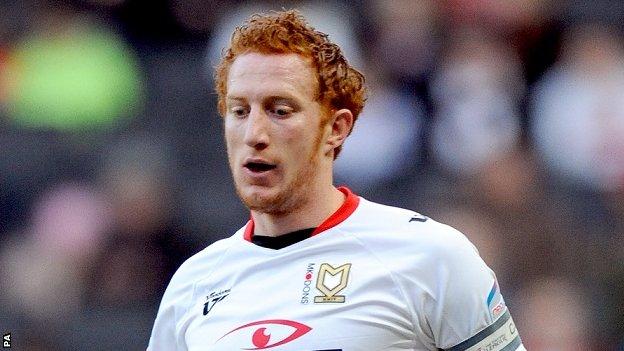 Milton Keynes Dons manager Karl Robinson is confident of signing a new striker before the start of the season.

"Hopefully we'll have [a deal for] a striker done before the middle of next week, someone who gives us a bit of physical presence," he revealed.

Speaking after Saturday's friendly against Nottingham Forest, Robinson confirmed the club had been working on the deal "since last Christmas".

"We have to agree personal terms but hopefully we can finalise it," he said.

MK beat Forest 1-0 in a match arranged as a testimonial for long-serving defender Dean Lewington.

The left-back has made 428 appearances and is now entering his 10th season with the club.

He is the only MK Dons player who was part of the old Wimbledon side which controversially relocated to the city back in 2003.

"He's a unique individual who has this club in his heart, he works so hard and gives everything he has for the cause," Robinson told BBC Three Counties Radio.

Lewington said: "It was a great day, but a slightly strange feeling, and I'm quite pleased it's all over, though very thankful to everybody who worked so hard in setting it all up."

The 30-year-old son of England assistant boss Ray Lewington backed Robinson's moves to strengthen the squad for the new League One campaign.

"The squad for this season is starting to take shape," he said.

"The gaffer is always looking to improve where he can, it's an on-going process, and I think it will evolve as the season goes on, but I think we had eight academy players on the pitch at one point, which is a very good sign for the future."