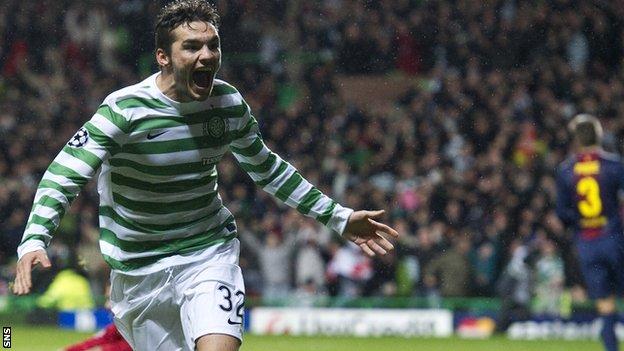 Celtic striker Tony Watt has joined Belgian side Standard Liege on a five-year contract for an undisclosed fee.

The 20-year-old, who has been capped by Scotland Under-21s, was signed by Celtic from Airdrie United in 2010.

He rose to prominence with a goal in the Champions League victory over Barcelona in 2012.

"It wasn't an easy decision to leave the club I support and I honestly can't explain the feeling I got every time I wore the hoops," Watt said.

"I want to thank everyone at Celtic for making my dreams come true and giving me an unforgettable three-and-a-half years."

Watt was farmed out to Belgian outfit Lierse on loan last season and their top-flight rivals Liege were sufficiently impressed with his six goals in 13 appearances to agree a transfer fee with the Scottish Premiership outfit.