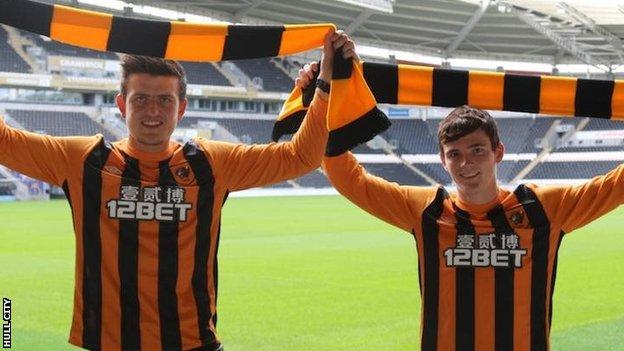 Scotland international Robertson, 20, has joined for a fee of £2.85m, while Maguire, 21, has signed for the Premier League side in a move worth £2.5m.

He has been named in the PFA's League One Team of the Year for the past three seasons and was part of the Blades side who lost 5-3 to Hull in the FA Cup semi-final at Wembley in April.

His performances while at Tannadice led to him being voted PFA Scotland Young Player of the Year.

As one left-back moved from Tannadice to Hull, another moved in the opposite direction as 21-year-old Conor Townsend joined the club on a season-long loan.

Hull have been busy in the transfer market this summer, with manager Steve Bruce keen to get business done early ahead of their Europa League third qualifying round first leg against AS Trencin in Slovakia on Thursday.

The arrival of Robertson and Maguire at the FA Cup runners-up follows deals for Tom Ince,Jake Livermore and Robert Snodgrass.