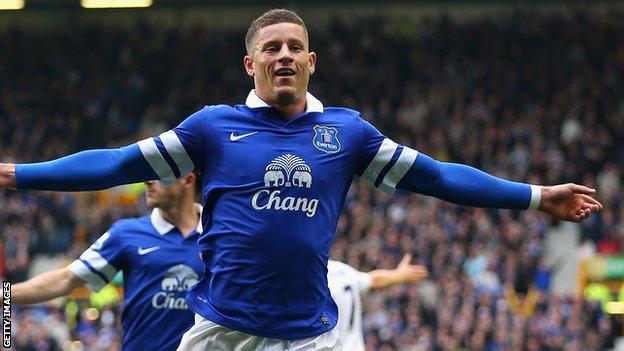 Everton midfielder Ross Barkley has signed a four-year contract extension with the club.

The 20-year-old scored six Premier League goals last season and was part of the England squad at the World Cup finals in Brazil.

Manager Roberto Martinez said: "It is a four-year deal which reflects his new role and his development. This is as big news as we could get.

"He is still a young man but is a massive part of our squad."

Barkley made his debut for Everton at the start of the 2011-12 season and had loan spells with Sheffield Wednesday and Leeds United before becoming a first-team regular under Martinez last season.

He made his England debut against Moldova in September 2013 and made three appearances at the World Cup.

He said: "Signing a new contract is a dream. I've played for Everton most of my life. This is a big thing for me."

Chairman Bill Kenwright said: "Everton and Ross have always been the perfect fit - Roberto has made it even more special.

"This was an important agreement and, I have to say, was conducted in a way that showed clearly the devotion to Everton of everyone involved."

Everton have signed midfielders Gareth Barry and Muhamed Besic this summer, while Martinez himself agreed a new five-year deal in June.