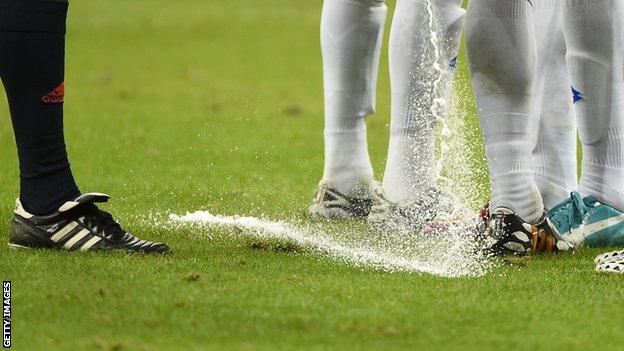 Vanishing spray will be introduced in the Premier League next season following its success at the 2014 World Cup in Brazil.

Referees use the spray to indicate the position of free-kicks and the distance the defensive wall must retreat.

The Premier League had said it did not plan to introduce the spray until it had monitored it in other competitions.

But chief executive Richard Scudamore said the Premier League was "open to developments".

He explained: "It was clear from watching the 2014 Fifa World Cup in Brazil that vanishing spray benefited referees, players, and all of those who watched the matches.

"Following consultation with our clubs and the Professional Game Match Officials Limited [the refereeing body], we have decided to introduce it in the Premier League and look forward to having it in place for the 2014-15 season."

The spray, which has been used for several seasons in the Brazilian and Argentine leagues, will also be used in next season's Champions League.

It evaporates about a minute after being administered from a canister by the match official and helps prevent players from stealing ground at free-kicks.

PGMOL general manager Mike Riley, said: "As an assessor at the World Cup, I saw first-hand the benefits of vanishing spray for referees, and for the game as a whole."

The spray will not be used yet by the Football League, which intends to hold trials of its effectiveness in next season's Johnstone's Paint Trophy.

Football League chief executive Shaun Harvey said: "The introduction of vanishing spray into the Johnstone's Paint Trophy will give us the opportunity to observe its use in domestic football so that we can better understand its effect on the flow of the game."