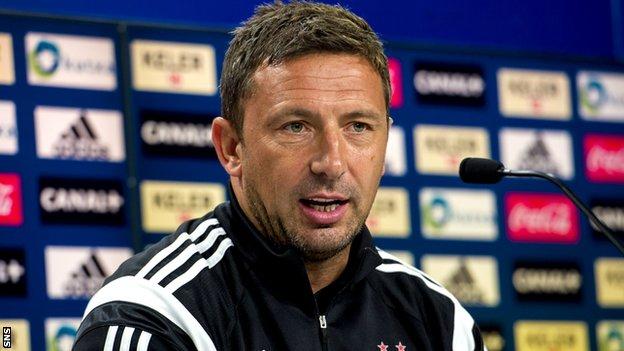 Aberdeen boss Derek McInnes says his team are confident they can produce a positive result in the Europa League against Real Sociedad in San Sebastián.

The Dons trained in the Anoeta stadium with only Clark Robertson missing.

"Obviously Real Sociedad is a strong name in European football and I think, like many, La Liga is seen as the strongest league in Europe." Said McInnes.

"We are delighted to be playing against them."

Aberdeen followed up their 8-0 aggregate win over Latvian side Daugava Riga with an impressive 2-1 defeat of FC Groningen to reach the third qualifying round.

McInnes feels that having faced four competitive fixtures already in Europe is an advantage with the Spaniards only having played a number of friendly matches.

"We want to do as best we can," he said. "We feel we as a team are in a good place just now and take the confidence from the start we have had to our season.

"From our point of view we would rather go into a game of such importance having played competitive games and obviously we have that over Real Sociedad.

We have a couple of players out injured and others who are not available but that's just the way it is.

"But, we understand the level of opponent we are up against so while we might be ahead in physical condition I still think it is a very difficult game for us."

Defender Shay Logan believes the tie is a huge step up from their two previous opponents in the competition but is confident the players can once again raise their game.

He said: "The further you go in a tournament, the competition is going to get higher and Real Sociedad are a very, very good team."

Real Sociedad head coach Jagoba Arraste conceded his team will not be at full strength for the game - with Antoine Griezmann also completing a £24m deal with Atletico Madrid - but says they are confident of a positive outcome.

"Of course we are not at 100% - that's normal at this stage of the season," said Arraste. "But we are in condition to compete.

"We have a couple of players out injured and others who are not available but that's just the way it is."