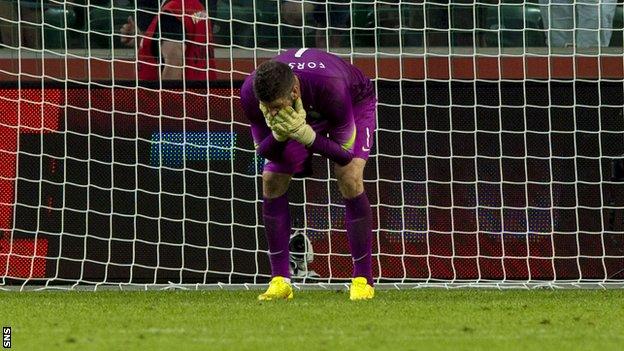 Celtic boss Ronny Deila said his side "lost their heads" in the 4-1 defeat by Legia Warsaw in the Champions League third qualifying round in Poland.

Efe Ambrose was sent off as Callum McGregor's early goal was cancelled out by a four-goal haul from the home side.

It could have been worse had Ivica Vrdoljak scored one of the two penalties awarded to the hosts.

"I'm unbelievably disappointed. We started well and then conceded an easy goal. We lost our heads," said Deila.

"We lost the ball in the centre of the pitch so many times and the back four didn't stay together. They got easy chances, and then there was the red card and after that it was a totally different match.

"Worst of all is the commitment. We needed much more energy in the game. We did not stay together for 90 minutes. That's what concerns me the most.

"We still have a chance if we go to Murrayfield and have the supporters behind us as I know we will."

McGregor, whose goal had given Celtic an away win in the previous round against KR Reykjavik, gave the visitors a dream start when he cut inside and curled the ball into the top corner.

However the lead lasted only two minutes, and things got worse for Celtic when Ambrose was sent off before half-time for a last-man foul on Michal Kucharczyk.

With Deila's men already trailing 2-1 it was an uphill challenge, but the Celtic boss refused to have a go at the Nigeria international.

"It was not only that situation, it was a consequence of many situations," he said. "We lost the ball too much, the back four was not together, they were not pushing out together and were staying too wide. When we lost the ball we were completely open."

Celtic were 2-0 down after the first leg of their Champions League play-off against Shakhter Karagandy of Kazakhstan last season, but secured a 3-0 win in Glasgow to reach the group stages under then boss Neil Lennon.

And Deila is hoping for another big comeback next week.

"But we have to learn from this week. We need a whole different attitude and discipline in our play.

"It was not the plan to go forward at 2-1. We had a spell when we had good control but started making stupid mistakes and they got space behind us.

"That is my responsibility. I have to be much clearer as to what I expect and how we perform as a team, defensively and offensively and tonight we lost our heads and that is not good enough."