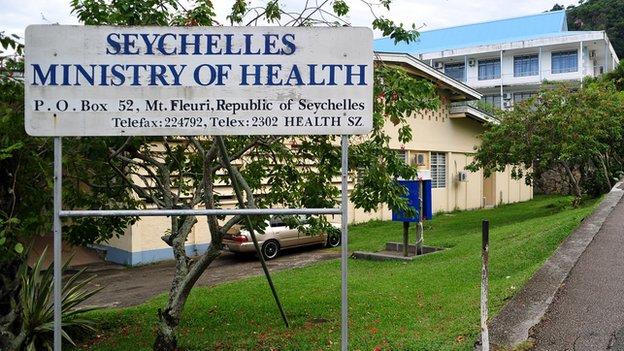 Seychelles have cancelled Saturday's 2015 Africa Cup of Nations qualifier against Sierra Leone because of fears over the Ebola virus.

It means Seychelles have forfeited the match and consequently their place in the competition.

Earlier on Thursday it was confirmed to BBC Sport that Sierra Leone were prevented from boarding a plane at Kenya's Nairobi Airport that would have taken them to Seychelles for the second-leg tie.

The decision to stop the team travelling was taken by Seychelles immigration authorities, who are concerned about the spread of the deadly virus.

It followed the news that Sierra Leone's president has declared a public health emergency in the country to curb the outbreak.

"I would like to state that the Seychelles FA lays no blame at the feet of the Sierra Leone FA for this.

"We have taken the decision because of the advice sent to us by the Seychelles Ministry of Health.

"We also received a letter from the Ministry of Immigration saying it would not allow the Sierra Leone team to enter our jurisdiction.

"They are asking us to postpone the game for an indefinite period, so we feel it is right to forfeit now rather than drag it out."

Sierra Leone, who had led the tie 2-0 after last week's first leg, are now set to be awarded a place in the next stage of the qualifiers.

Chetty added: "Looking purely from a football point of view, I am extremely disappointed about the situation. The country has been more excited about this match than it has been for a long time."

Seychelles have informally registered their decision with the Confederation of African Football and will submit a written notice in the coming hours.