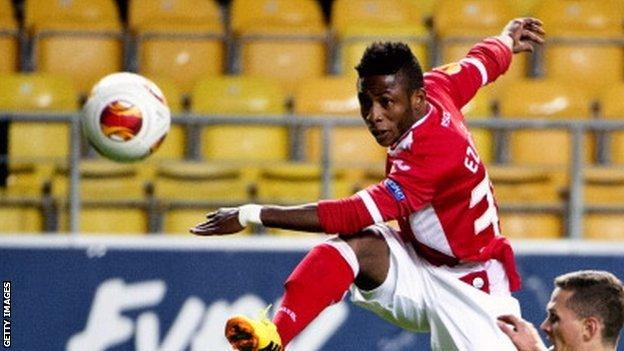 The 20-year-old leaves the Belgian side after two years with them and says he owes them a debt of gratitude.

"Being with Standard has filled me with good memories and I cannot thank the club enough," Ezekiel said in an emotional video message to Standard TV.

At Al-Arabi Ezekiel will reportedly become of Nigeria's best-paid players, earning about $3.8m per year.

It is believed the Qatari club have paid $10.8m to sign the player who scored 32 goals in 91 matches for Standard Liege.

Ezekiel added: "When I came to Europe, other clubs never gave me a chance to play. But Standard Liege gave me an opportunity, a chance to show myself and my talent, for me that will stay with me forever.

"I owe everything to Standard and I really appreciate everything they have done for me since the first day I got here.

"I will always have Standard Liege with me wherever I go. "

Ezekiel had also attracted interest from clubs in England, France, Germany, Italy, Turkey, Russia and Ukraine but he felt the offer from Al-Arabi was too good to turn down.

"It's one opportunity that is good for me and good for the team. And we didn't want it to go by," he added.

"I didn't expect to leave Standard so soon. I thought I would leave maybe after another season or two but this transfer came from nowhere.

"This deal is also good for me and my family and I couldn't say no. So I have to take it and look ahead."

Ezekiel believes he is leaving behind a squad as competitive as it has been for some time and the club will have no problem replacing him.

"The set-up is great here and I know the club have the talent to take the club further," he said.

"I wish the team all the best for the future. I know Standard can produce players, different kind of talent and I know they will be successful in the future. "

Ezekiel made his debut for Nigeria as a second-half substitute during their friendly against Mexico in Georgia, Atlanta on 5 March.

But he was left out of Stephen Keshi's provisional 30-man squad for the World Cup in Brazil.