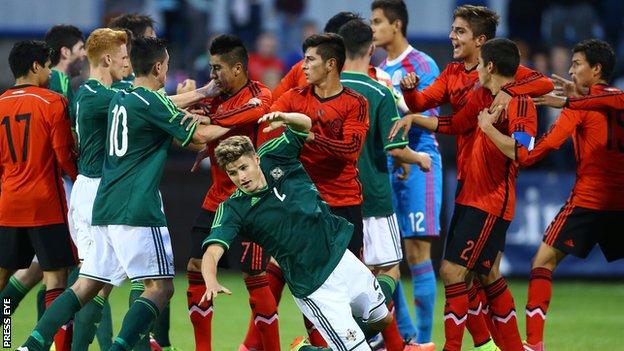 The Mexican FA have issued an apology for the fighting which took place during an Under-20 match at the Milk Cup tournament in Northern Ireland.

Three Mexican players and one from Northern Ireland were sent-off as a result of the violence which has marred the youth football event.

The four have been suspended by the tournament organisers.

After the game, NI team manager Stephen Craigan said Mexico should not be invited back to the Milk Cup.

"I think some of our players had to protect themselves from kicks, punches and head butts," he said.

"It was not nice. There were young kids here from around the world. They were here to watch a football match, they do not expect to see that.

"Mexico did it last year, they had a man sent-off for punching. They have a history of it.

"I have to be careful what I say, but I would like to think Mexico will not be back at the Milk Cup.

"It is not what the Milk Cup is all about. It is about people enjoying football and young kids expressing themselves, not that kind of violence."

The first of two mass brawls at Wednesday night's match at Coleraine Showgrounds happened in the 57th minute when Mexico were leading 1-0.

Fighting broke out in the penalty box as Northern Ireland were about to take a corner.

Late in the game, with Northern Ireland 2-1 up, a third Mexico player, Kevin Gutierrez, was dismissed for kicking out.

The 2-1 result stood and Northern Ireland will lift the trophy if they avoid defeat in their final game against Canada on Friday.

The Milk Cup is an annual week-long youth tournament which is in its 32nd year.

It has long been regarded as a hugely successful international event but the shocking scenes at Coleraine will have dealt a blow to its reputation.

Announcing the four players had been suspended, the Milk Cup organisers said: "The Mexican FA and Irish Football Association will be informed of the behaviour of their teams in what turned out to be a poor advertisement for soccer.

"We would ask all teams to remember that they should be ambassadors for the game, their club and their country and appeal that they examine their behaviour and strive towards fulfilling the good intentions laid down in Fifa Fair Play."