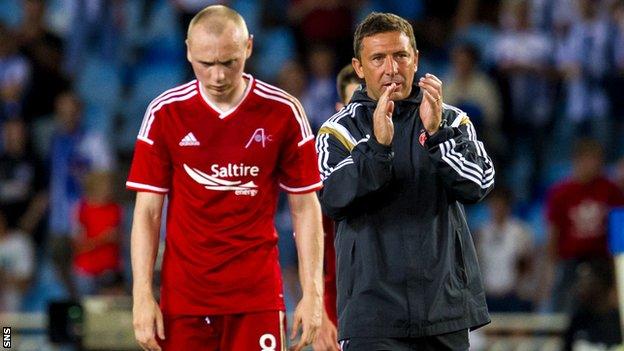 Derek McInnes was left frustrated by the 2-0 defeat to Real Sociedad in the Europa League third qualifying round.

Second half goals from David Zurutuza and Sergio Canales left the Dons with it all to do in the second leg at Pittodrie.

"I applaud my players for their efforts. Domestically we will not be dominated like that," said McInnes.

"We did what we could to try and get an away goal, and we were a bit more threatening in that last 20 minutes."

Aberdeen had arrived in San Sebastian confident they could get another positive result following victory in the Netherlands last week against FC Groningen, but found the La Liga side much tougher opposition.

The Dons managed to limit the Spaniards to half chances for most of the first half, but Zurutuza took advantage of slack defending to break the deadlock after the interval before Canales hit a 25-yard strike past Jamie Langfield.

"We have a lot of frustrated boys but it is only half time," said the Dons manager. "There's no disgrace in losing 2-0 to Real Sociedad, they're a very good side, but we're not used to losing games.

"The first 15 minutes were okay. We got the ball side-to-side well and worked round their shape, but from that period until five minutes before half-time Sociedad were well on top of us with and without the ball, forcing mistakes.

"They're a clever team, they're a good team, and they really tested us. Our opportunities were few and far between.

There's no disgrace in losing 2-0 to Real Sociedad, they're a very good side, but we're not used to losing games.

"The two goals for us are avoidable, I think we can clear the first one certainly.

"The second one, it's a superb strike from Canales. Sometimes you've just got to applaud good individual play and that's what that was."

Dons captain Russell Anderson refused to believe the tie was over, with an early goal in front of a capacity Pittodrie crowd vital to their chances.

He said: "They were what you would expect of a team playing at the top end of the Spanish league. They were comfortable on the ball.

"In saying that we limited them to a few clear cut chances - I don't think Jamie's had too many saves to make.

"I think we're still in it, obviously things are going to have to go our way next week, but as they say it's only half-time and if we can get a good start next week you never know."