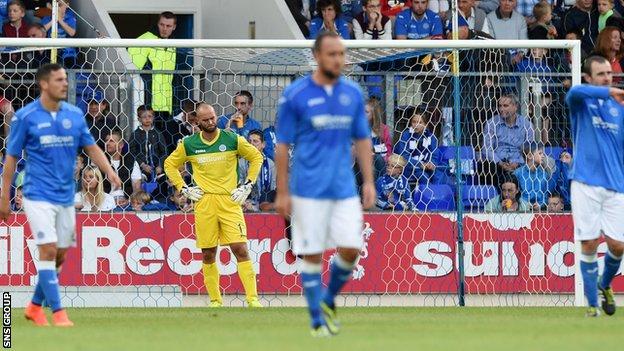 But he concedes the Saints will need to turn in a much improved performance in Slovakia to stand any chance.

"The tie's still alive but we've got to play better," said Wright. "We've got a chance.

"We don't do it very often where we're outworked or outcompeted, but that's what it was."

Dave Mackay's stoppage-time strike put a dent in Spartak Trnava's lead, which came from an Ivan Schranz double either side of half-time at McDiarmid Park.

Wright took his usual place in the dugout despite the recent death of his mother.

And he cut a frustrated figure in the first half as the hosts struggled to compete with powerful and slick opponents.

"We can't play for 15 minutes at the start of the second-half and five or 10 minutes at the end and expect to beat teams that are technically very good," he explained.

"We as much played into their hands as they were good because we didn't perform in the first-half. That was the most disappointing thing.

"We gave away too much possession in bad areas and our decision-making was poor. It made the first half a long half, it was all too easy.

"They got a lot of second ball and with the quality they have they hurt us.

"The real St Johnstone have to turn up (next week). If it's like we were in the first-half we'll be out of it."

Saints striker Stevie May missed the game because of a thigh strain picked up in training and the home side laboured for long spells, creating few chances to excite the 7,001 crowd until the last few minutes, with David Wotherspoon hitting the crossbar before Mackay's goal.

"We didn't have enough movement to give us options in the first half," said assistant manager Callum Davidson.

"But you need to give credit to the opposition, they were strong and technically very good.

"We're a fit team but we came up against a very good side."