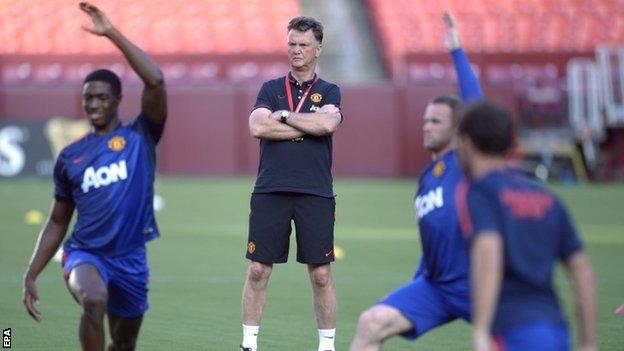 Video analysis has been a key part of the club's summer tour to the Unites States, said defender Jonny Evans.

"I think it is a lot more detailed at the training ground," he said.

"They have spent thousands on it and a few of the lads have seen HD cameras around the pitch. We have this system where he can watch us on the pitch."

Former Netherlands coach Van Gaal was appointed as successor to David Moyes in May after a disappointing first season for United following Sir Alex Ferguson's retirement, in which the club finished seventh in the Premier League.

He officially took charge last month after leading his country to third place at the World Cup, but has already introduced several changes.

The Dutchman has ordered his players to speak in English to each other, rectangular tables have been replaced by circular ones at meal times to encourage conversation and the 62-year-old has implemented double training sessions.

Evans, 26, said Van Gaal was using the filming to give players detailed feedback on areas such as positioning on the pitch.

"I think a lot of teams use it but we are looking into it in quite a lot of detail," said the Northern Ireland centre-back.

"He is saying 'you should be five yards to the right', we are able to see things that are happening live on the pitch.

"That kind of scrutiny is new to every single player. The case before was that as long as we got the results everything was fine.

"David Moyes would have looked at videos a lot so we got a bit of that from last year." But he added now "we are looking at things in detail".