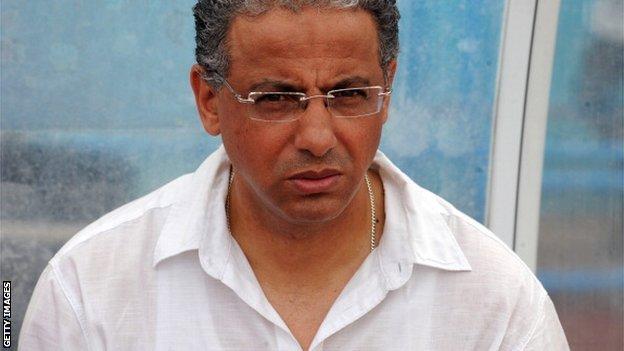 Kenya have appealed against the one-year suspension handed to their coach Adel Amrouche by the Confederation of African Football.

Amrouche has been punished for allegedly spitting at a match official during Kenya's Africa Cup of Nations qualifier in Comoros in May.

Football Kenya Federation general secretary Michael Esakwa told BBC Sport: "On Thursday, we filed our appeal documents with Caf. We have given the DVD copy of the match which has a record of all that transpired.

"I was there during the match, and it (the alleged spitting incident) didn't happen."

Eighteen months in the hot-seat

He said: "Amrouche did not spit on the referee during the match. He did in fact very vehemently and with agitation express his displeasure but he did not at any point behave in any such manner as alleged.

Abdou and his federation presented themselves to be quizzed for further clarification on the matter.

And it was confirmed by Esakwa that "comments from the coach of Comoros form part of our appeal to Caf".

In the absence of Amrouche, Kenya will be led by James Nandwa in Sunday's Nations Cup qualifier second-round second-leg tie against Lesotho.

Kenya, who welcome their opponents to the Nyayo Stadium in Nairobi, trail 1-0 from last week's first leg.

Despite their off-field problems, Esakwa remains confident Kenya can pull off the result they need.

"They are all very upbeat and confident of a good result on Sunday. But we are not under-rating our opponents," he said.