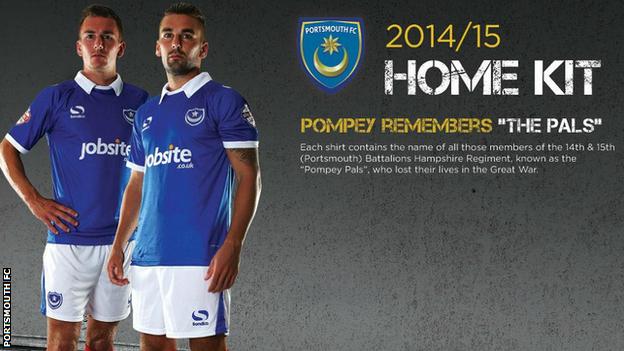 Portsmouth Football Club have honoured every member of the 'Pompey Pals' who fell during World War One by including their name on the new home kit.

The Pompey Pals, the 14th and 15th battalions of the Hampshire Regiment, recruited heavily at Fratton Park.

They went on to suffer heavy losses at the Great War, with more than 1,400 making the ultimate sacrifice.

"This is not about celebration, it's about commemoration," Pompey fan and historian Bob Beech told BBC Solent.

"We need to remember what all of these men and women were doing during the Great War across the region."

The shirt was launched on the 100th anniversary of Britain's declaration of war on Germany, while the club also unveiled a Pompey Pals memorial at Fratton Park on Monday paying tribute to those who served.

"When Lord Kitchener's pointing finger was seen by all, Portsmouth Football Club responded with recruitment stands outside the ground," added Beech.

"Many of those who turned up in Pompey blue were soon in army khaki. It is important we remember them."

The shirt harks back to the 1914 version and contains the same badge - the first ever worn on a Portsmouth shirt.

"It's the traditional royal blue Pompey shirt with the old badge of Portsmouth Football Club which was first used 100 years' ago," said Beech.

"Woven into the kit more specially are the names of the fallen of all the Pompey Pals."