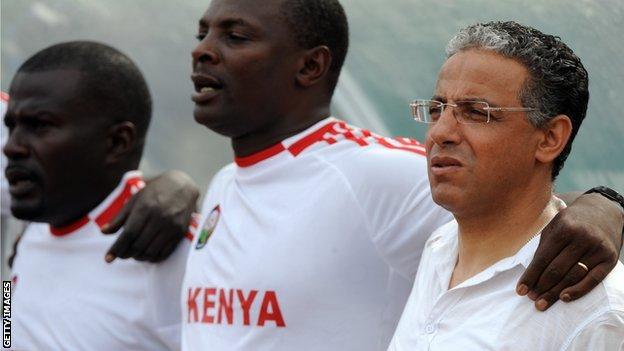 Adel Amrouche has reacted to his dismissal as Kenya coach by defending his record in charge of the team, despite their shock exit to Lesotho in the 2015 Africa Cup of Nations qualifiers.

Kenya were unable to overturn a 1-0 deficit from the first leg of their second round tie, dumped out of the competition following a goalless draw in the second leg in Nairobi on Sunday.

It is the first time in my life I have been sacked, but I am ok

Amrouche was suspended for both games with the Confederation of Africa Football punishing him for allegedly spitting at a fourth official during a Nations Cup qualifier in Comoros in May - a charge he denies and is appealing against.

And the Algeria-born Belgian believes that situation is to blame for their surprise exit.

"I have never lost with this team in 16 matches," he told BBC Sport. "The two games that Kenya lost I was in the stands because I was suspended.

"When we lost on Sunday I was in stands and the story that I am banned for a year ruined the players' concentration and focus.

"I can prove, with video evidence, I never spat at the referee. It is an injustice against me and my team. The issue has killed our hopes of qualifying."

Amrouche pointed to his previous success with the Harambee Stars as further evidence that he was doing a good job.

"I have brought in new faces and new talent. The team hadn't won a trophy for 12 years but we won the Cecafa Cup in 2013 .

However, while Amrouche sad that his reign as Kenya coach is over, he is also philosophical about the decision.

"But in this job one day you are here and then next you are not, you must always have your bags packed," he said.