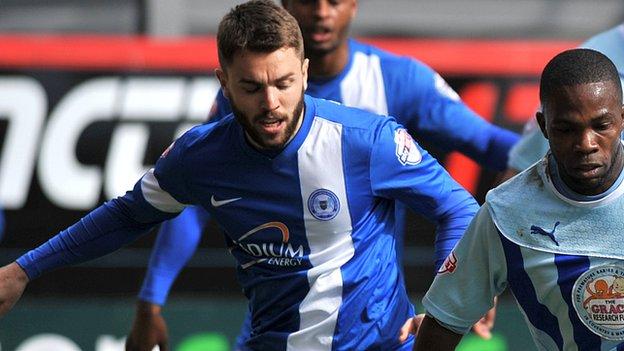 The 24-year-old, who can also play in midfield, is the 10th summer signing by City boss Steven Pressley.

He follows the same loan route taken by Cherries keeper Ryan Allsop and winger Mohamed Coulibaly when they signed for Coventry in the deal that took Callum Wilson to Bournemouth last month.

"Josh McQuoid has been a target for us throughout the summer," said Pressley.

"He is a proven League One striker who knows what it takes to be successful at this level and also has Championship experience."

City played out the second half of last season with only top scorer Wilson in their frontline ranks, supplemented by a succession of loan strikers.

But Pressley has concentrated on strengthening his attack over the summer and has brought in Marcus Tudgay following his release by Nottingham Forest, and Shaun Miller, who was let go by Sheffield United.

"He will give us another striking option," added Pressley. "He is at a perfect age who very much suits the footballing philosophy at this football club and I'm sure he'll have a positive impact."

McQuoid, who is signed up until January 2015, has already made a mark at League One level, having hit three of his career haul of 22 goals in helping Bournemouth to promotion from League One in 2012-13.

As well as playing Championship football with Bournemouth, and in separate loan spells with Millwall and Burnley, he spent the second half of last season on loan with Peterborough United and scored one of the goals as Posh beat Chesterfield 3-1 in the JP Trophy final at Wembley.