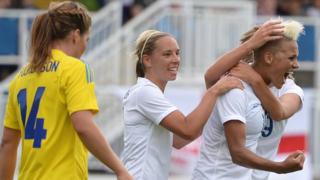 England produce their best display since Mark Sampson was appointed head coach last December with an impressive 4-0 win against Sweden in a friendly at Hartlepool.

Karen Carney scored the first and last goals, while debutant Fran Kirby and Lianne Sanderson were also on target.

England's next match is a World Cup qualifier against Wales in Cardiff, where a draw will guarantee England's place at next year's finals in Canada.