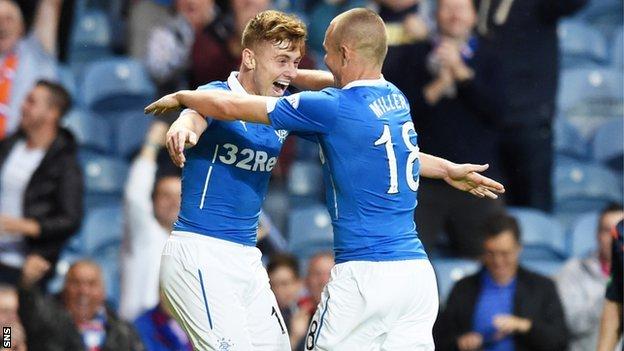 Alan Stubbs began his Hibernian managerial reign with an extra-time defeat at Ibrox in the first round of the Petrofac Training Cup.

Lewis Macleod's strike put Rangers in control in the first half.

But Hibs looked the stronger after the interval and Danny Handling pounced on defensive hesitancy to level before being red-carded with 11 minutes to go.

Farid El Alagui blazed over for Hibs and Nicky Law curled in the winner as they punished the tiring 10 men.

Defenders Darren McGregor and Marius Zaliukas also made their debuts, with centre-half Bilel Mohsni suspended after his red card in a friendly against Derby County.

El Alagui was one of three summer signings to start for Hibs and his eagerness up front, aided by the occasional prompting of Alex Harris and Sam Stanton, kept the Rangers defence on its toes.

That Rangers keeper Cammy Bell did not have a save to make in the first half suggests it did its job, with the greatest danger, a Harris cross for El Alagui at the back post, cleared by McGregor and Ian Black knocking a Liam Craig header off the line.

Mark Oxley was another new face in the Hibs line-up but the keeper will wish he had got down more quickly to prevent the opening goal in 14 minutes.

Lee Wallace was, as ever, keen to attack down the left flank. His cross was too strong for Miller but Macleod was lurking at the far corner of the box and he stepped ahead of his marker, took a touch and rifled a low shot home.

Rangers lost their way after the break and Hibs, with skipper Craig exerting greater influence, looked the likelier to find the net.

Stanton caught the Rangers defence napping and ought to have scored when one on one with Bell but shot straight at the keeper.

New signing David Gray did well to stymie an attempt by Miller at the near post, the last action before Hibs levelled.

Black opted to chest a cross into the box back to his goalie and, as Darren McGregor watched on in horror, in stepped Handling to slot past Bell.

El Alagui had two great chances to take advantage of a static Rangers defence. First he controlled a lovely Craig ball into the penalty area but fired over the bar, then headed over from a corner from four yards out.

David Templeton replaced McGregor midway through the second half and his quick feet proved to be the undoing of Handling who hauled the player down.

Most expected a booking but referee John Beaton opted to send the Hibs player off.

Oxley raced from his line and did enough to put off Boyd in the six-yard box as he tried to seal the win within the 90 minutes.

In extra-time, Macleod's inviting cross was missed by Boyd and Wallace before Law swept home the winning goal in the 101st minute.

Rangers will host Clyde in round two.