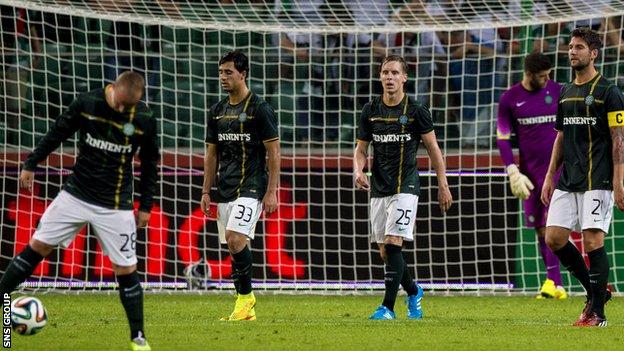 Captain Scott Brown is sure Celtic can emulate last season's dramatic Champions League comeback as they bid to overcome Legia Warsaw on Wednesday.

The Poles lead 4-1 from the first leg of the third round qualifier.

Celtic needed a 3-0 home win against Shakhter Karagandy to reach the group stage in 2013 and Brown is backing his team-mates for more heroics.

"It's going to be hard because we need three goals but I believe we can do it," said the injured midfielder.

"The Shakhter game last season was huge for us - we scored three goals then and we have to do it again this week.

Brown is missing with a hamstring problem sustained in pre-season and is not expected to return until mid-September at the earliest.

In his absence, Celtic were overrun in the Polish capital after taking an early lead.

Defender Efe Ambrose was sent off in the first half and the result could have been much worse but for two missed penalties from the hosts.

"Everyone knows it was a disappointing result and it was hard to take," added Brown.

"But we've got a chance to put it right, We'll need our top players to play well and I'm sure that's what they'll do.

"It always hurts when people write you off, but that's football. People always write you off. That's when you have to put the wrongs right and go out there and show everyone what you can do.

"You can prove a point to everyone out there on the field."

With Celtic Park being refitted after hosting the Commonwealth Games opening ceremony, Ronny Deila's side will again play at Murrayfield, having beaten KR Reykjavik 4-0 at the home of Scottish rugby for a 5-0 aggregate win in the previous round.

"The fans will come out again in their thousands and that's going to help us," said Brown.

"We've seen how our fans can help put pressure on the opposition, which is what we'll be looking to do against Legia Warsaw.

"The fans were fantastic in the game against Reykjavik and I'm sure they'll create another brilliant atmosphere at Murrayfield on Wednesday."