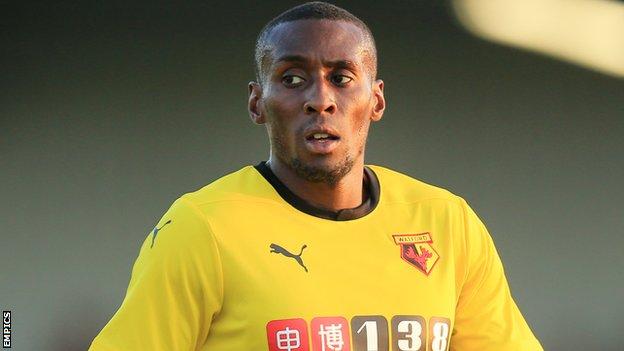 Lloyd Dyer scored his first goal for Watford as they overcame Stevenage to reach the League Cup second round.

The League Two side almost took a surprise lead when Charlie Lee's 25-yard strike cannoned against the post.

But the visitors took a 52nd-minute lead when Fernando Forestieri fed Diego Fabbrini, who unselfishly squared to Dyer to leave him with a tap in.

"We did a lot of running in that first 20-25 minutes just trying to stay in the game and energy levels would have been sapped by the amount of work that we did and certainly in the last 10 minutes when we were looking to press for the equaliser, we were just a little bit off the normal pace we would expect to have.

"But credit to the lads. Five players who were in non-league football last year were playing out in our starting XI and they acquitted themselves very well and showed the potential that they have got.

"They had opportunities, they hit the post early on from a strike outside the box.

"But half-time came at a good time but second half we scored a very good goal and, although they had some pressure towards the end, we saw it out."