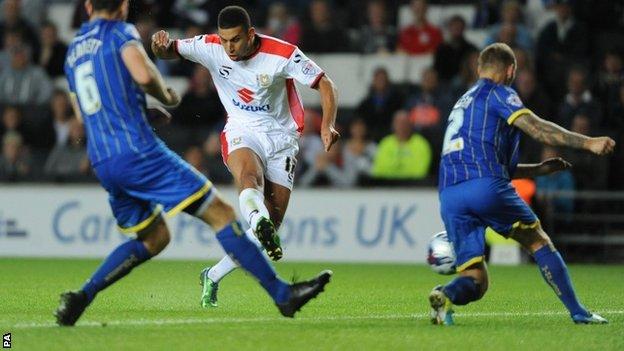 MK Dons knocked AFC Wimbledon out of the League Cup in the second-ever meeting between the two sides.

The clubs, both borne out of the old Wimbledon, faced each other in the FA Cup two years ago, which MK also won.

This cup tie lacked the hype of the previous encounter, particularly after Kyle McFadzean, Daniel Powell and Benik Afobe had put MK 3-0 up.

But still AFC Wimbledon, the phoenix club created by fans, are searching for the win that may provide them with the smallest sensation of revenge.

Whether beating the enemy would make any of the past decade easier to bear is yet to be seen, but what possibly grates the most is the sight of their rivals building a youthful, attractive team, who were fully deserving of their win.

It was clear to see that the outpouring emotions that set the tone of the first meeting were heavily diluted this time around, with fewer fans from both sides in attendance.

And gone were the banners and signs, that were so prevalent two years ago, proclaiming ownership of the genuine heritage to the now extinct Crazy Gang.

That does not mean old wounds do not run deep though, as some AFC fans who made the trip to Buckinghamshire still harbour enough resentment to feel they needed to rush to the front of the stand after MK's second goal and scamper onto the pitch after their late consolation. Both incidents were quickly quietened by stewards.

AFC, a division below the hosts in League Two, should have led in the game, when Tubbs' parried shot was hit tamely by Sean Rigg on the rebound, and it was just seconds later that MK had the lead.

McFadzean, who has two goals from his first two MK appearances, connected with a near-post flick from a Danny Green corner that somehow found its way in, and from that point onwards Karl Robinson's men looked comfortable.

Powell's effort from the edge of the area shortly after the break wrong-footed James Shea in the AFC goal and then the visitors' defensive duo of Alan Bennett and Mark Phillips got into such a mix-up that Afobe was able to stroll through and calmly finish.

There was still time for a couple of scuffles between players and for Tom Hitchcock to force a goal-saving clearance from Bennett under his own bar, before McFadzean brought down Tubbs, who converted from the spot in injury time.

But, despite a couple of tense moments, the signs are that this fixture may well be close to becoming a reasonably sedate affair. That is until the first meeting at Kingsmeadow, whenever that may be.

"I think they were better than us. They have a very, brave open philosophy. To concede from a set-piece is hard because you're chasing the game from that point.

"We want a cup run, but we would have liked to have put a smile on the face of our fans. But we're not defined by whether we can beat Milton Keynes, we're defined by what's happened over the last 12 years.

"[The mini pitch invasion] was disappointing. Obviously they want to celebrate the goal. But it is just a minority who have toppled over the edge with their emotion. I don't think there is too much malice in it."

"It was satisfactory. It's always a hard fixture. You have to give credit to Neal and his team for how they approached the game. But I thought we looked very clinical.

"It's going to be a very competitive fixture from here on in, regardless of where we play them or whatever league it is in.

"It will never be like the first one. But you have to be careful, because you don't want to undermine anybody and hopefully we've come out of this being very respectful to the opposition."