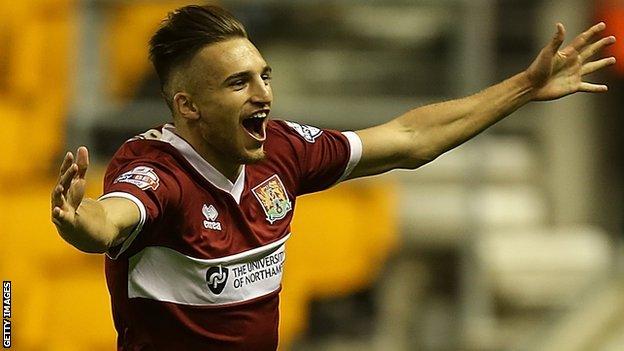 Northampton midfielder Lawson D'Ath scored twice as the League Two side stunned Championship Wolves in the first round of the League Cup.

D'Ath's poked rebound and teenager Ivan Toney's header had given the Cobblers a shock 2-0 lead.

However, a quickfire double from Wolves' pair Nouha Dicko and recalled club captain Sam Ricketts levelled the score in a frantic second-half.

D'Ath then won it with a looping header to cap a dream debut.

"This is what cup ties are all about. If you don't give in and keep going to the end you might get something from the game and we managed to do that.

"One thing I have spoken about is that if we are to have a decent season we have to be resilient and when things go against us I want to see what my players are all about - and they have answered in the best possible way.

"They dug in and they had to defend for their lives at times. But saying that we did better on the counter and I thought we were always a threat."

"Fair play to Northampton, they played very well, defended well and on the break they had a lot of chances and a lot of shots.

"Two of the three goals were from set-pieces and it is something we are normally very reliable and good at."

On their pursuit of Leicester striker Chris Wood:

"It looks like that one has passed and we are moving on. We didn't get a deal agreed with either the club or the player."