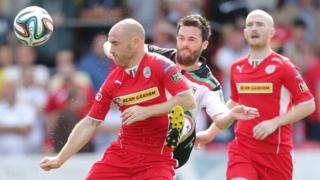 Irish Premiership champions Cliftonville start their title defence with a 0-0 draw at home to Glentoran.

Both goalkeepers - Cliftonville's Conor Devlin and Elliott Morris of Glentoran had to work hard for their clean sheets at Solitude.

Cliftonville defender Jamie McGovern was sent-off near the end when a foul on David Howland earned him a second yellow card.