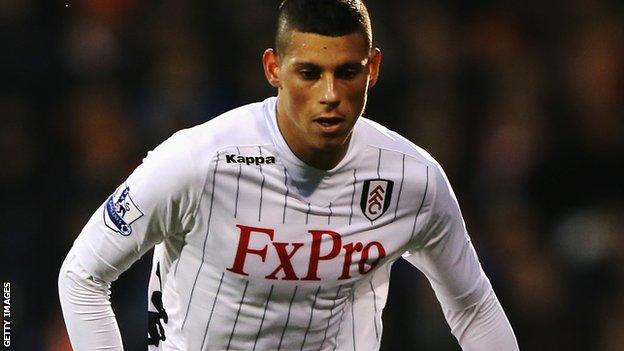 Millwall defender Matthew Briggs says manager Ian Holloway was a big reason for his move to The Den this summer.

The 23-year-old left-back has signed a one-year deal with the Lions following his release by Fulham.

"I had a bad time with injury last season and Ian has picked me up and shown great belief in me," Briggs told BBC London 94.9.

"I want to play for him and do well for myself. It is his character really. He brings out the best in players."

He added: "He knows what everyone is capable of and makes you believe in yourself.

"People lose belief in themselves sometimes and he can bring it back out in you."

Holloway, 51, was appointed Millwall boss in January and guided the club to Championship survival lasts season, eventually finishing 19th in the table.

However, former England Under-21 international Briggs believes the south east London club should be looking further up the table.

"You can already see Millwall is a different footballing club altogether since Ian Holloway joined," he said.

"They play much better football and I think you can expect big things. You can see what he has done with past teams like Blackpool and Crystal Palace, getting them promoted to the Premier League.

"I don't see any reason why he can't do it with Millwall."

Briggs came through Fulham's academy and made a total of 29 appearances during his spell in west Londoners. But he was released at the end of last season after only featuring twice in 2013-14.

Briggs is hoping to make an impression when he returns to Craven Cottage with Millwall on 16 August.

"It was a little bit disappointing [to leave Fulham] but at the same time it is a fresh start for me," he said.

"It might feel a bit strange but it is one of the games I am looking forward to.

"If I do get the shirt I will be able to prove to Felix Magath and Fulham that I am capable and maybe it was a mistake for them to let me go.

"I can prove to Ian Holloway and the Millwall fans that I am the one for the job and it was a good decision for them to take me."