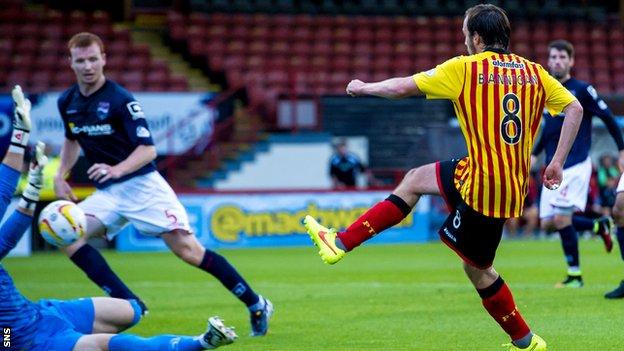 Partick Thistle won their first game of the season with an emphatic defeat of Premiership rivals Ross County.

And, having waited until February for their first home Premiership win last season, manager Alan Archibald will be delighted with the three points in their opening Firhill encounter this term.

With Thistle's fixture against Celtic postponed due to the latter's ground being used during the Glasgow 2014 Commonwealth Games, the Jags had had a longer wait for their first competitive match of the season.

But they made up for lost time against a Ross County side who had already sustained a league defeat this term.

Defender Danny Seaborne was drafted straight into the Thistle line-up after joining this week on a two-year deal while fellow summer signings Ryan Stevenson and Abdul Osman also made debuts.

Higginbotham was a constant thorn in County's side and he went down when challenged by goalkeeper Antonio Reguero early on.

However, referee Andrew Dallas produced a yellow card and cautioned Higginbotham for diving.

Gary Fraser then turned a shot onto the post as Derek Adams' side continued to struggle against a determined Jags attack.

After Jake Jervis had fired across the face of Thistle's goal, Higginbotham unlocked the County defence to set up Bannigan for the opener, the midfielder lashing the ball past Reguero.

The loss of a goal moved County into action and Rocco Quinn tested Fox before Graham Carey's strike skimmed the crossbar.

However, they fell further behind when O'Donnell's cross was turned in by Frempah, who had just come on to make his debut as a half-time replacement for Scott Boyd.

Jervis almost brought the Dingwall side back into the match but Fox saved impressively after the striker had hammered the ball towards goal.

A back heel by Stevenson set Thistle away on a sweeping move that ended with Fraser converting Elliot's pass.

And an angled drive by O'Donnell completed a fine night's work for Archibald's team.