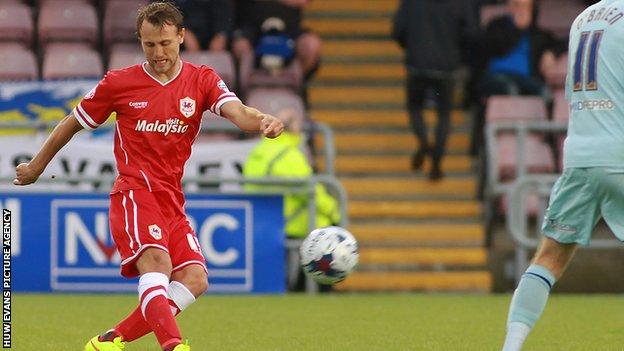 Championship side Cardiff knocked League One Coventry out of the Capital One Cup at Northampton's Sixfields Stadium.

Cardiff looked to have sealed victory when Coventry defender Ryan Haynes turned Mats Moller Daehli's cross into his own net.

But Sky Blues striker Shaun Miller converted a Haynes cross to ensure a nervy ending for the Welsh club.

Ole Gunnar Solskjaer's side dominated early on and pressed high up the pitch when they were without the ball, making it difficult for Steven Pressley's side to break out of their own half.

Magnus Wolff Eikrem's long pass over the top of the Coventry defence found Nicky Maynard, who played the ball into the path of Burgstaller to shoot low into the corner to put Cardiff ahead.

Solskjaer's side struggled to make their dominance count and Coventry came back into it towards the end of the match.

They should have drawn level 13 minutes from time when Miller blasted the ball over the bar with just Cardiff goalkeeper Simon Moore to beat.

Three minutes from time it looked as if Cardiff's passage to the second round was safe, when full-back Haynes hit the ball high into his own goal, under pressure from Cardiff's Kadeem Harris.

But 90 seconds later Haynes made amends crossing the ball for Miller to fire past Moore.

Cardiff now face League One Port Vale in the second round.

"We were a little bit nervous in the early part of the game, and we didn't quite get the balance right between staying and pressing, and we got picked off on a few occasions, but I thought we grew into the game.

"I thought we were really good in the second half, I thought we got the balance right, and I think we look a danger on the break, I really do.

"We have to win games of football, but when you look over the piece, I think there's a lot to be encouraged about."

(On being linked to the Huddersfield managerial vacancy): "It's obviously flattering to be linked with such a job, but I am truly happy at this football club.

"I really enjoy it, I've started what I believe is a long journey in terms of the development of this club. There's a lot of work to be done over the coming years and I certainly hope I'll be here to see it through."