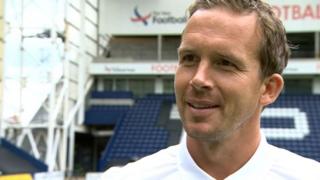 Preston North End striker Kevin Davies does not expect any team to run away with the League One title in 2014-15.

The Lilywhites finished fifth last term, 18 points behind champions Wolves, and then lost in the play-offs to Rotherham.

Davies, 37, is in the second year of a two-year deal with Preston and tells BBC North West Tonight he will assess his playing future as the season progresses.