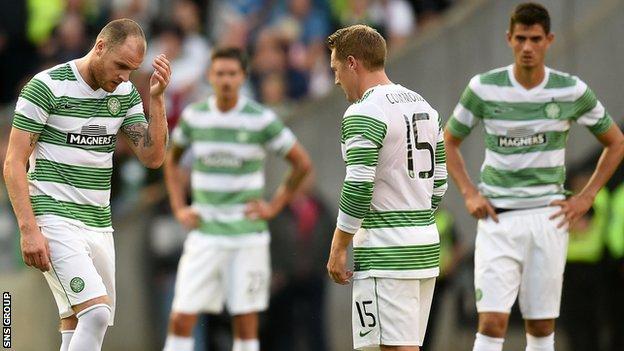 "Attracting players in may be a problem now," Bonner told BBC Scotland. "I think they've missed a trick. It should have been done before now.

"But do they spend the money without Rangers in the league?"

Since taking over from Neil Lennon in June, manager Ronny Deila has so far brought in Craig Gordon, the former Hearts and Sunderland keeper who was out of contract, and forward Jo Inge Berget on a six-month loan from Cardiff.

Neither featured in Wednesday's 2-0 defeat against Legia and disappointed fans at Murrayfield began to turn their ire on chief executive Peter Lawwell.

The standard at Celtic Park is gradually going down

Celtic earned £33m in prize money from their involvement in the Champions League over the last two seasons and the club announced pre-tax profits of £21.3m in February.

The sales of Victor Wanyama and Gary Hooper last summer contributed to those healthy figures and Bonner is worried Celtic may now find it hard to stave off interest in goalkeeper Fraser Forster and defender Virgil van Dijk.

"That's the dilemma," added the former Republic of Ireland international. "They have two big assets there that they can get money in for to compensate for the loss of Champions League earnings."

Murdo MacLeod played with Bonner at Celtic Park in the 1970s and 80s and he too is concerned by recent trends.

"The players all want to play in the Champions League and if they don't have that avenue, they'll maybe look to go away," said the former Scotland midfielder.

"Celtic are losing one or two big players every season and not replacing them. The standard at Celtic Park is gradually going down.

"It's a very disappointing start to the season. Losing 6-1 to a Polish side is not good enough."

Following the Legia defeat, Deila said: "I want to build a team who could last for many years."

However, MacLeod believes a side that reached the Champions League group stage last season and won the league title by 29 points does not require major work.

"The players will be annoyed reading about a side that needs rebuilt," he told BBC Scotland. "I don't agree with that. I think Celtic needed one or two good quality players to improve.

"That side romped the league. It was a strong side that went on great unbeaten runs and scored a lot of goals."

Bonner, who spent 20 years as a player with Celtic, described the team's defending against Legia as "shocking", adding "they were second best all over the pitch".

"There is a lot of work to be done and it's tough for Ronny because he's come into a club with high expectations," he continued.

"There are big demands on a rookie manager and he will need to pick his team up quickly."