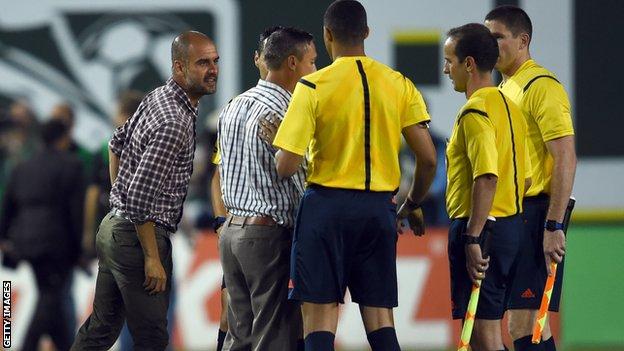 Bayern boss Pep Guardiola was angry with some tackles from behind and rejected a post-match handshake with All Stars boss Caleb Porter.

Robert Lewandowski put Bayern ahead but Bradley Wright-Phillips equalised with a drive from outside the area.

Landon Donovan eluded two defenders to score the winner against his old club.

In the 86th minute, Netherlands forward Arjen Robben was introduced as Bayern ended the game with almost a full-strength line-up, but Schweinsteiger was forced off with an ankle injury following a robust tackle from Will Johnson.

Bayern confirmed that the midfielder "has a bruised ankle but nothing serious" after the game.

Regarding Guardiola's anger, Donovan said: "I understand he doesn't want his players to get hurt. They're not great tackles but they're not the worst tackles I've ever seen and I hope Schweiny's not hurt."

The MLS side contained a host of former Premier League players in addition to Wright-Phillips and Donovan, with Thierry Henry, Tim Cahill, Clint Dempsey and Liam Ridgewell all making appearances.